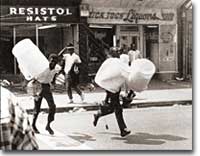 On the evening of August 11, 1965, an African American motorist was stopped in the Watts neighborhood for suspected drunk driving by a White police officer.  Violence quickly followed, lasting for six days and resulting in 34 deaths, hundreds of injuries and $40 million in property damage.  The Watts Riot changed Los Angeles and the United States.

From our Ebook Collection

In this book, see Chapter 4 for the pre-riot conditions in the Watts-Willowbrook neighborhoods and Chapter 6 for the context of the riots.

In this book, see Chapter 3 for information about the McCone Commission.

In this book, Chapter 12 contains information about the role of journalism during and after the Watts riot.

Chapter 7 of this book is a discussion of Little Scarlet, by Walter Mosely, set in the aftermath of the Watts Riot.

Ask library staff to retrieve these items for you.

The Riots on the Web

Watts, the 1965 Los Angeles Riots, and the Communicative Construction of the Fear Epicenter of Los Angeles  An example of an academic paper by Sorin Adam Matei and Sandra Ball-Rokeach on the psychological effects of the Watts riot on Los Angeles residents.

The McCone Commission Report : Violence in the City : An End or a Beginning?  From the archives of the University of Southern California.  Contains a chapter, 144 Hours in August, 1965.,  that is a timeline of the riot, beginning with the Arrest of Marquette Fry on August 11,

Los Angeles Riots Collection from the Mississippi Department of Archives and History.  Contains page image from Federal Register and articles from contemporary newspapers and magazines.

News coverage from major U.S. Newspapers from the Proquest National Newspapers Core.  Search all papers or limit your search to a single title, like the Los Angeles Times.